I really love putting things in order: Around my house you’ll find tiny and neat stacks of paper, alphabetized sub-folders, PDFs renamed via algorithm, and spices arranged to optimize usage patterns. I don’t call it life hacking or You+, its just the way I live. Material and digital objects need to stand in reserve for me, so that I may function on a daily basis. I’m a forgetful and absent-minded character and need to externalize my memory, so I typically augment my organizational skills with digital tools. My personal library is organized the same way Occupy Wall Street organized theirs, with a lifetime subscription to LibraryThing. I use Spotify for no other reason that I don’t want to dedicate the necessary time to organize an MP3 library the way I know it needs to be organized. (Although, if you find yourself empathizing with me right now, I suggest you try TuneUp.) My tendency for digitally augmented organization has also made me a bit of a connoisseur of citation management software. I find little joy in putting together reference lists and bibliographies, mainly because they can never reach the metaphysical perfection I demand. Citation management software however, gets me close enough. When I got to grad school, I realized by old standby, ProQuest’s Refworks wasn’t available and my old copy of Endnote x1 ran too slow on my new computer. So there I was, my first year of graduate school and jonesing heavily for some citation management. I had dozens of papers to write and no citation software. That’s when I fell into the waiting arms of Mendeley.

Like any piece of software that runs on OS X and contains a database, Mendeley described its interface as “iTunes-like.” And while the interface was pretty polished, that wasn’t what sold me. Mendeley was an organizer’s dream. It renamed and organized all of my PDFs just the way I wanted them. It had a burgeoning social function as well, which was interesting, but the userbase was still too small to be useful. For me, Mendeley was a well-designed piece of software that did exactly what I needed it to do, without memory leaks or an obtuse user interface. I had an impeccably organized PDF library and I was happy. Citing papers was almost an afterthought. Then, late last week, I got some really bad news on Twitter from @anneohirsch:

For those of us that use it: Good, bad, what do you think? – TechCrunch: Mendeley Will Be Sold To Elsevier http://t.co/rgzjvXq8 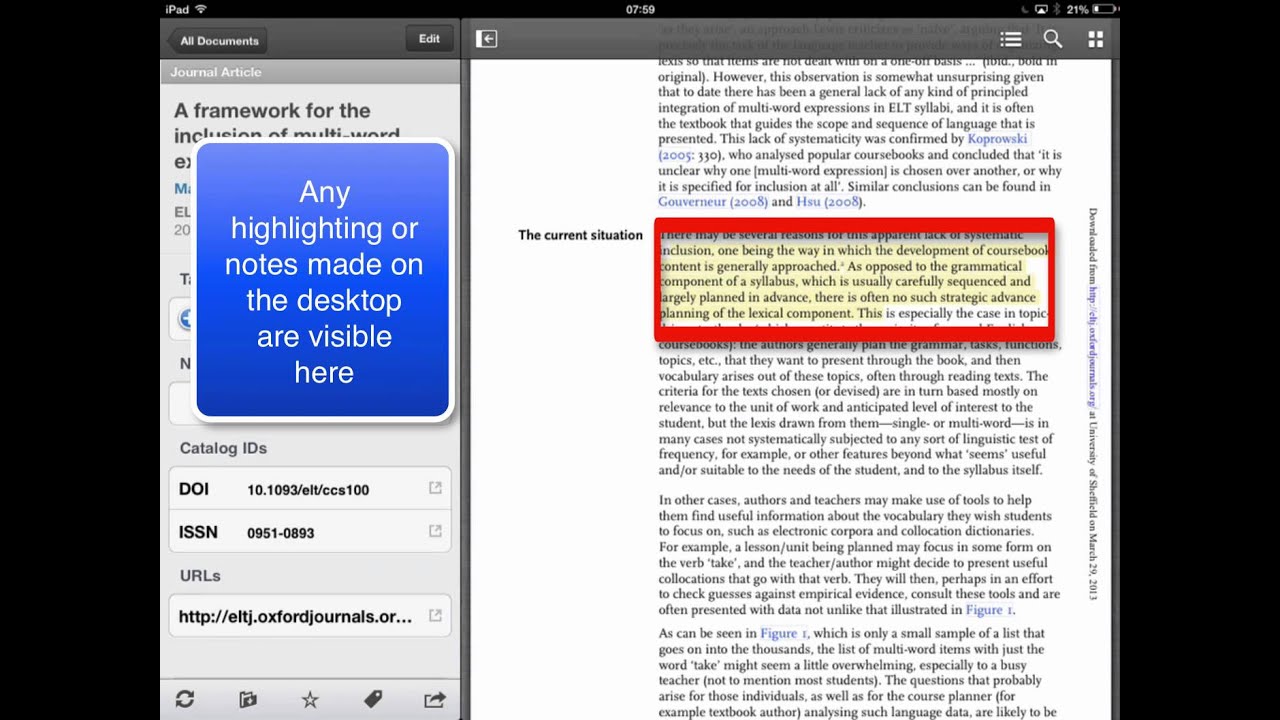 Elsevier isn’t the worst company in the world. They’re not dumping millions of gallons of oil into coastal ecosystems, nor are they a massive mercenary army that kills for top dollar. They are a publishing house and they make money by controlling the distribution of the knowledge that I and fellow academics produce. You may have never heard of the company, but you know their “products”: The Lancet, Gray’s Anatomy(The reference book, not the TV show), and ScienceDirect are all Elsevier properties. A private organization that maintains such important tools must also shoulder a great deal of responsibility. To own The Lancet is to own a voice of scientific authority. In other words, if it is written in The Lancet then it is the forefront of modern medicine. But Elsevier does not always respect the trust that many have bestowed upon them. From 2000 to 2005 Elseveir published six periodicals that looked like peer reviewed medical journals but were actually nothing more than paid advertisements for pharmaceutical companies. They have lobbied against open-access publishing via the Research Works Act, and have sued their own customers on ambiguous legal grounds. They even sued The Vandals for their parody of the Variety magazine logo. They are despicable enough to warrant a dedicated, popular campaign calling on academics to boycott their journals. The Cost of Knowledge campaign has amassed over thirteen thousand signatories in a little over a year. One of my most-used tools, something that I rely on to do my work almost every day, will most likely be bought by this very large company. My methods courses did not prepare me for this.

My obsession with organizing has also meant that I am a magpie of note taking tips and recording device tricks. I like to see how other people organize things and see what rings true to my idiosyncrasies and helps me overcome my failings. In the social sciences, we typically push all of these little tricks of the trade into a large canopy called “methods.” We take and teach methods courses, we hold brownbags on methods, and we write books dedicated to this amorphous meta discussion of how we do what we do. It is trendy, in both class and in written form, to comment at length on how our very methods intimately and directly shape our knowledge production. But in all of the methods courses I have taken, and in all the books I have read, no one has tackled the issue of digital methods. There is no shortage of suggestions about note cards, pocketable spiral-bound notebooks, and tape recording devices. There are whole journal articles and book chapters devoted to the proper posture and demeanor for an interview with powerful interlocutors. These are all important skills to have, but I have yet to see a single methods text that weighs the pros and cons of Evernote, the built-in citation manager in Word, or the finer points of OCR’ed PDFs. Should I rely on my phone’s voice recorder or should I get a dedicated device? What am I supposed to do when my digital tools are bought by a large corporation that I hate? Do I add my citation management software to the list of things in this world that I rely on but don’t condone? Or do I run to the opposite extreme and disavow all digital tools in my work?

I don’t want to stop using citation management software. It saves me time and makes for a much more polished final product. I also don’t want to put myself at a disadvantage when it comes to producing publishable material. The job market has gotten so fierce that grad students, in most disciplines, are expected to have several peer-reviewed publications under their belt before they get their Ph.D. The cost of opting out, in my opinion, is too much to ask. I know some grad students that happily do their bibliographies by hand, and that’s fine for them. But that is not where my strengths lie. I need the help and want to benefit from the tools available.

At this point, you might be asking, “what is Elsevier going to do with Mendeley that warrants uninstalling it from you computer?” When I first heard about Mendeley’s possible acquisition I posted the story to the Academic Publishing subreddit. One of the commenters made a really good point that gets at the heart of the matter. Here’s the full comment:

Publishers love snapping up reference managers, because they know that an uncontrolled reference manager product will encourage storing and sharing libraries, taking them out of the loop after the first download. They want these software packages to be enforcers of their copyright claims, instead of tools for researchers.”

It’s an astute observation and one I want to dwell on for the remainder of this essay. In some ways, this is nothing new. Daniel Kleinman, in his essay, “Untangling Context: Understanding a University Laboratory in a Commercial World” demonstrates that commercial interests have been embedded in scientific methods for a long time. In his study of the Handelman lab at the University of Wisconsin-Madison he concludes that any lab that wishes to produce a patentable product will be “subjected, in many senses, to the ‘rules’ that govern the world of commerce.” Experiments that use ready-made instruments are easier (and cheaper) to do than ones that require custom or special equipment. Is Mendeley’s acquisition just another instance of “the world of commerce” influencing science, or is this a new and unique relationship between capital and knowledge production? Intellectual property control has long been at the heart of scientific work, but it has never been quite this fine-tuned. An experiment or field work might have to conform to the realities of the present economic condition, (not everyone can do their fieldwork in Mali, not everyone can use the Large Hadron Collider) but when you sit down to write up your conclusions, you shouldn’t have to worry whether the PDF you got from a colleague will get you sued. Note cards and locally saved bibliography documents will rarely rat you out to JSTOR.

My personal solution to my Mendeley dilemma is to find a software solution that embodies my politics. I want my software to have all the affordances and features of a society that cherishes open dialogue. It should be a tool that, through its use, reaffirms and establishes the politics I hold and it embodies. For me, that means adopting free or open source software. Free software is not a silver bullet, but it is an excellent start. Anthropologist Chris Kelty noted in his ethnography of open source developers that free software communities act as a recursive public. A recursive public…

“is vitally concerned with the material and practical maintenance and modification of the technical, legal, practical, and conceptual means of its own existence as a public; it is a collective independent of other forms of constituted power and is capable of speaking to existing forms of power through the production of actually existing alternatives.”

Now that Zotero has a stand-along client, I will be learning how to use that. Zotero is an open source project funded by nonprofit organizations and provides an actually existing alternative to the corporate interests of Elsevier and other publishing companies. It has no interest in the intellectual property status of my journal articles and is built by people who actively want such an alternative. By using Zotero I can play a small but active role in establishing the kind of political reality I want to experience. I can play a bigger role by contributing to the Zotero project through coding, writing editing or translating instructional material, or helping others users in a forum.

Robert K. Merton, one of the first sociologists to study the production of scientific knowledge, observed that all science follows a set of norms. One of those was communalism: the free exchange and communal ownership of ideas. Without communalism, according to Merton, scientists could not build off each other’s work. Merton’s descriptions were admittedly idealistic– the scientists that were working on the atomic bomb weren’t openly sharing their progress– but he was not wrong. Science is a social enterprise. When our accounts of reality are owned by profit-seeking organizations and those organizations control the very tools that help us exchange those accounts, we are in danger of losing something fundamental to the institution of science. Ideas should not end up behind prohibitively expensive pay walls, especially when so little of that money goes towards new scientific discovery. I will miss Mendeley’s automatic PDF filing, but perhaps I can work with the Zotero community to get that back into my life while also helping others.

David is trying to make #dropmendeley happen on twitter. Help him won’t you? @da_banks